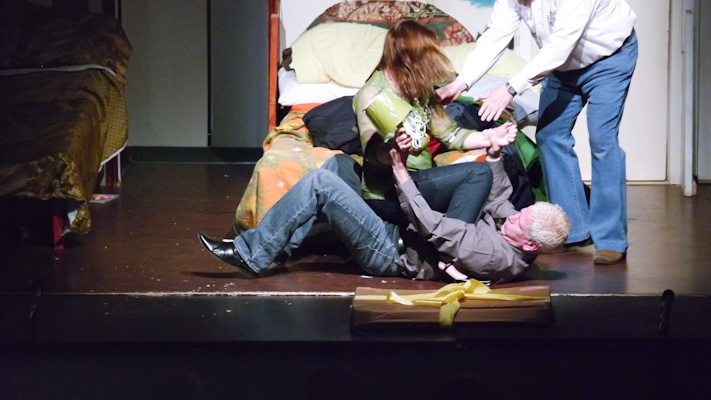 “Ayckbourn at his best”

Alan Ayckbourn said “It’s a comedy though it’s called a farce….a study of the British in bed, with everything except sex!” Asking friends about their bedroom pastimes he learnt that some played board games, read all night and, in one case, passed the time making furniture. There was plenty of the latter required from our stage crew with a large set

including dressing tables, doors and three beds to construct.The result was a triumph of ingenuity, design and hard graft. Of course it was a mixed blessing when one bed collapsed during rehearsal and we had our angle for a press story!

Sir Peter Hall called the play itself ‘a masterpiece’.

Three couples have their bedrooms invaded by Susannah and Trevor who can only find peace when they have totally discomfited everyone else. Though it offers visual comedy, humorous one liners and delightful silliness, it is the insensitivity of this neurotic pair, wrote critic Michael Billington, which allows them to ‘exacerbate the crises in other people’s marriages.’ The conclusion provides a poignant message about how, despite differences of perception and priorities, such couples can achieve harmony and muddle through contentedly.

Our directors, Denise Robertson and Kath Watts, guided the cast effectively throughout their preparations and rehearsal. 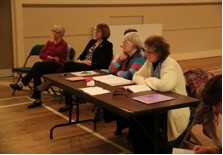 Debbie Kragnes accurately conveyed Susannah’s insecurity while her extrovert hubby Trevor (Paul Shaw) created a trail of chaos. But all the ladies seem to fancy him! This naturally upset DIY fanatic Malcolm (Richard Bradshaw) whose Casanova like aspirations left new wife Kate (Cate Titterton) singularly unimpressed. Trevor’s ex, Jan (Marian Bateson) was a beacon of sanity, for the most part, and managed her bedridden husband Nick’s bad back with vigour and alacrity. The latter (Simon Bateson) cleverly avoided playing the sympathy card and his convincing anguish provoked much hilarity throughout the hall! Finally elderly Delia (Alison Titterton) and Ernest (Barry Holley) demonstrated their inclinations to be out of touch with both the times and each other while still relishing culinary treats and expressing exasperation over sleep deprivation. Our Technical director John Wallis, ably assisted by Diane Ogleby, rose to the lighting and audio challenges while all the backstage and front of house teams ensured the three performances ran very smoothly. Visually it was lively and attractive thanks to excellent costumes and colourful set. Once again the excellent photography of Jonathan Wyllie and superb design skills of Mikey Beard added significantly to the quality of publicity.